Some of the military hardware available in game 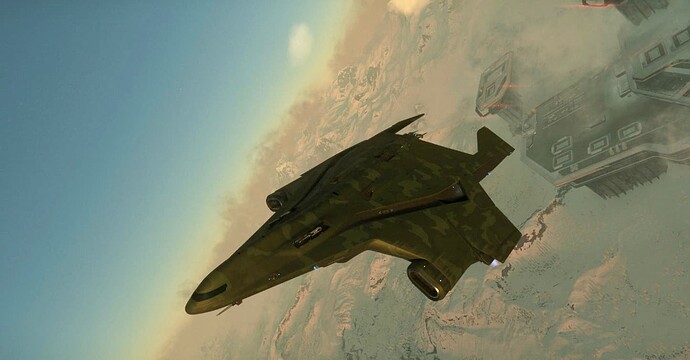 Had a lot of fun at JT with these. Highlight was shooting down 5 ships in a row with the Ballista before running out of missies and getting blown up! My crime stat was fairly big after that! You can fit two of these in an M2 which is pretty epic!

I think there was something wrong with the mission - apparently the opposing mission was not coming up in mobiGlass so everyone was marked as friendly? This meant you were always going to get a crime stat if you took anyone on.

I was murdered twice. Once I must’ve lost about 450k of drugs. That’s the only weakness of the 315p: it’s so weak there’s no time to get in and take off if someone immediately engages you when landed. It’s best to use it when there is a small group (such that there is little or no queue at machine).

We did take the comm array down which means you don’t get a crime stat for killing other players but then other people put it back up again. The good news is I am now an expert at getting out of prison in under 15 mins regardless of my crime stat rating!

yeah, so far I’ve found the mining and repair missions in prison can cut down prison time significantly.

Lots of exploits being used during JT, people were locking the door with a corpse so no one could get in and also glitching up through the floor of the production room and killing you. Funniest thing I saw was someone in an 890J upside down over the facility with their hangar open and tractor beaming packages inside and using their ship as a giant shield